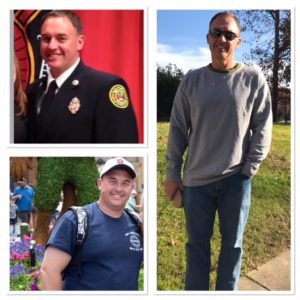 At the beginning of this journey, I wanted to be in better shape for my job. I became a firefighter later in life at age 41. Entering this career at an older age, I wanted to show that it wasn’t just a young person’s career; that someone can do this even when they’re older. Additionally, I faced a family history of high blood pressure and type 2 diabetes.

I started CrossFit in February 2014 with the goal of getting into shape for the physical fitness tests required for the fire academy. Recruit school was physically demanding; I passed all of the physical requirements and dropped around 10 pounds in 6 months. During recruit school (see top left picture above). At that time nutrition was not much of a priority. After being assigned to my first station, I ate with the guys on my shift on the “meal train” where everyone throws in $10/day and we buy our food to cook for the day. At the time this seemed like a tough budget to create healthy meals. I continued to work out consistently but still managed to gain some weight (see bottom left picture above).

In February 2017 when C2 announced its “Whole 30” challenge I decided to jump on board and get back in better shape. I had seen the benefit of tracking calories and macros experienced by my wife and other friends. The “Whole 30” was not difficult for me but I did have to plan ahead since I work 24 hour shifts. I batch cooked food for my wife and I, packed it for work, tracked all my calories and macros, had a body fat analysis at Nutrishop and lost 16 pounds in that 30 days of eating “Whole 30” approved foods. I introduced some foods back in after “Whole 30” and have continued to track calories and macros and to increase the amount of food I eat, all while continuing to lose weight. I have introduced some healthier eating into the fire stations I’ve worked at and am able to eat on the meal train with the guys at my station most days. Additionally C2’s endurance class was a huge catalyst for improving my distance running, my mile time and my overall endurance during workouts. I continue to run 1-2 miles after every CrossFit group class and have retained most of my strength by training 6 days a week on average. I’m wearing clothes I wore in high school and some are even smaller. I continue to weigh in at Nutrishop every two weeks to track my progress and despite having an injury in March which resulted in me having to scale CrossFit workouts for months, I’ve lost a total of 53 pounds and 16% body fat in 9 months. C2 has helped me to go from someone who dropped only a few pounds while working out rigorously during recruit school without focusing on nutrition to someone capable of losing over 50 pounds with a consistent and focused training and nutrition plan.